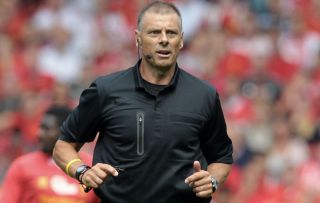 Former Premier League referee Mark Halsey has admitted he is amazed that Manchester United midfielder Fred was not shown a red card for a head-butt on PSG’s Leandro Paredes.

Fred, 27, joined United from Shakhtar Donetsk in 2018 in transfer which cost the Reds’ hierarchy a whopping £53.1m, as per Transfermarkt.

After a difficult start to life in England’s top-flight, the industrious midfielder finally appeared to be finding his feet after enjoying a very decent start to the new 2020-21 campaign.

United’s Brazilian has found himself included in almost all of Ole Gunnar Solskjaer’s starting line-ups after appearing to cement himself as one of his manager’s most trusted midfielders.

However, after a dire performance earlier this evening against Paris-Saint Germain during a match the Reds would have been desperate to take something away from, Solskjaer will be feeling bitterly let down by his number-17.

Fred was arguably the luckiest man in Manchester after a first-half collision with Paredes saw the South American push his head forward into his midfield counterpart’s.

Fans all around the world would have been holding their breath and expecting the worse, however, after a lengthy VAR review, referee Daniele Orsato opted to hold fire on awarding a red and instead brandished just a yellow card.

Ultimatley Orsato’s decision to issue Fred with a warning held no barring on the Brazilian’s evening after he did eventually see red mid-way through the second-half.

However, in light of the bizarre decision not to send the midfielder for an early bath, Stretty News reached out to former Premier League referee Halsey and asked for his professional thoughts on the incident.

“I thought Fred was extremely lucky not to be sent off for an act of violent conduct,” Halsey said. “He [Fred] appeared to head-butt an opponent.

“VAR was correct to recommend a review as the off the ball incident took place behind Italian referee Orsato’s back.

“I was amazed that after Orsato reviewed the monitor he only showed Fred a yellow card.”

Group H now hangs precariously in the balance as trio Paris-Saint Germain, RB Leipzig and United all sit on nine-points with just one to go.

United are set to face-off against RB Leipzig next Tuesday in a game they absolutely cannot lose.