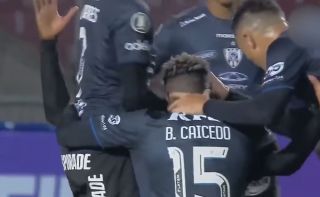 Ecuadorian wonder-kid Moisés Caicedo has admitted Manchester United are his favourite team as he dreams of playing in the Premier League and has hailed current midfielder Paul Pogba.

Caicedo, 19, currently plays for Ecuadorian side Independiente del Valle after joining their under-19s side at the start of 2019.

Primarily operating a deep laying midfielder, Caicedo has already showcased glimpses of being a perfect mixture between Pogba and Chelsea midfielder N’Golo Kante.

Not only does the teenager use his industrious work-rate to act as cover for his centre-back team-mates, he is also very competent when going forward which is displayed in his current stats.

Having already featured in 27 matches for his club’s senior first-team, the highly-rated teenager has been directly involved in an impressive eight goals in all competitions.

Speaking recently live on Global Digital TV, Caicedo has revealed where he sees his long-term future.

“The Premier League,” Caicedo said, as quoted by Sports Witness. “Manchester United are my favourite club.”

The youngster also went on to give particular praise to current Red Devils’ midfielder Pogba, who, by his own admission, is a player who’s style he always tries to replicate, he said: “I really like the game of N’Golo Kanté and Paul Pogba, I learn a lot from them every time I see them.

“I always try to do what they do, that’s why they are there.”