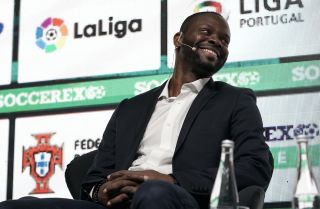 Former Manchester United striker Louis Saha has hailed current attacker Marcus Rashford and has labelled the Englishman as ‘unplayable’ as he believes the forward deserves to be treated the same as Lionel Messi, Cristiano Ronaldo and Neymar Jnr.

Rashford, 23, has spent his entire career with United after joining their world-famous youth academy all the way back in 2005.

Since climbing his boyhood club’s youth ranks, Rashford has gone on to feature in 229 matches in all competitions for the Reds’ senior first-team, contributing to 120 goals along the way.

Despite being just 23-year-old, Rashford’s presence among European football’s top-flight has felt like he has been involved in the game forever.

Having already showcased his attacking versatility, United’s number-10 can successfully operate anywhere across his manager’s front-line.

However, writing in his column for Le Parisien, former United striker Saha believes Rashford is best suited to a central role and feels the Reds’ coaching staff should be building the team around him, similar to how Barcelona view Messi, Juventus Ronaldo and PSG Neymar Jnr.

“He’s a calm guy who exudes confidence and humility,” Saha wrote, as quoted by Sports Witness. “At 23, he’s already almost the oldest in the squad, one of the leaders.

“He’s one of the best strikers in Europe. When he’s in the middle, he’s unplayable.

“His coaches need to put him in ideal conditions, as is the case with Neymar, Messi or Ronaldo.”

Read more: Man United’s name being used so AC Milan star can get his own way