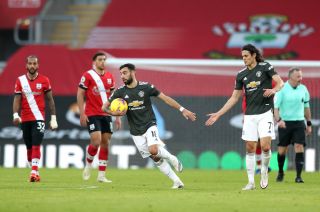 Since joining the Reds in January 2020 from Sporting Lisbon, Fernandes has provided goals, assists and also a taste of his very own winning mentality. It’s a key element in his DNA that makes him a Manchester United player.

The Portugal international if often spotted shouting and giving demands to his team-mates. This is something plenty of fans identified as a lacking aspect to United’s team for many years.

I guess you could say there’s a hint of Roy Keane in Fernandes. They’re completely different players but both share the same determination to win.

Footage has emerged which proves some similarities between Keane and Fernandes and it happened on Sunday straight after Edinson Cavani equalised against Southampton at St. Mary’s to make it 2-2.

After Cavani scored the second goal, all of the players went to celebrate only Bruno Fernandes who doesn't celebrate with the team, He rather asked them to come back in to score the third goal.

What a mentality this player has! 🧠 pic.twitter.com/CSsQT7lCoo

Fernandes screamed at his team-mates to get back quickly to resume play. He didn’t see the point in celebrating a goal and, at 2-2, he was right.

We fought until the very end when Cavani netted an injury time winner.