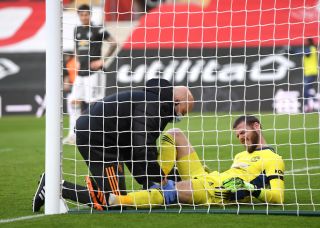 David de Gea has been at Carrington training complex this morning for treatment on a knock he sustained in Sunday’s 3-2 win against Southampton.

The Spaniard was forced off at half-time after struggling to keep out James Ward-Prowse’s free-kick which put Southampton two goals ahead going in at the break.

Sadly for De Gea, the injury came as he conceded a second goal of the evening, with the first from a Jan Bednarek header.

Whilst trying to save Ward-Prowse’s amazing free-kick, De Gea clattered into the woodwork and it looked like he picked up a knee injury as a result.

However, United had Dean Henderson to call upon and this injury may have come at a good time for the young English goalkeeper.

A run in the team will do him good but we fully expect De Gea to return as first choice keeper when fully recovered.

De Gea has since posted a video on Instagram showing him on the treatment table at Carrington.