Manchester United can seal their progression through to the Champions League knockout stages if they avoid defeat against Paris Saint-Germain at Old Trafford.

United’s away victory over the French champions, plus home wins over RB Leipzig and Istanbul Basaksehir have put them in pole position in Group H.

David de Gea was brought off at half-time at St Mary’s after colliding with the post and Dean Henderson was assured despite having little to do in the second period.

Henderson started against Istanbul Basaksehir last week and should retain his European starting spot if the Spanish number one isn’t deemed 100% fit.

Alex Telles was replaced by Brandon Williams late on in Sunday’s game but Solskjaer confirmed post-match that the Brazilian full-back’s problem wasn’t too serious.

Telles should line-up in the same back four that started on Sunday, with Luke Shaw still ruled out with a hamstring injury.

Alternatively, Solskjaer may opt for the same five-back system that secured the 2-1 victory at the Parc de Princes in October.

In that case, Axel Tuanzebe, who was outstanding in the away leg, would likely return in central defence alongside Harry Maguire and Victor Lindelof.

Solskjaer added on Sunday that he hoped Scott McTominay and Paul Pogba would return to training ahead of the fixture.

But there are no guarantees that the midfield duo will regain match fitness in time and Solskjaer could therefore name the same midfield diamond of Fred, Donny van de Beek, Nemanja Matic and Bruno Fernandes.

Van de Beek was efficient on his first Premier League start and deserves to retain his place in the Champions League.

Meanwhile, as per the MEN, Anthony Martial was sent home from training on Monday after being deemed too ill to train.

The Frenchman was excluded from the squad against Southampton and should be replaced by match-winner Edinson Cavani if unable to play.

Cavani inspired the sensational turnaround with two goals and assists at St Mary’s and will be desperate to prove a point against his former club.

However, according to the Guardian, Cavani is under FA investigation and will face a minimum three-game ban if found guilty for posting discriminatory or racist language after apologising for a deleted Instagram post which used the words “gracias negrito!”

Marcus Rashford, who provided the crucial cross for Cavani’s winner, could partner the Uruguayan veteran in attack if he is available. 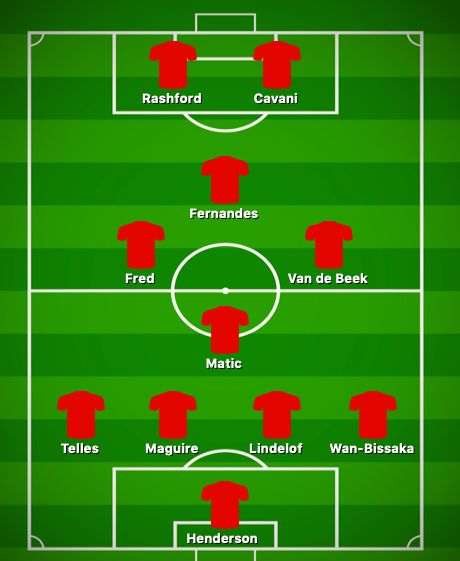