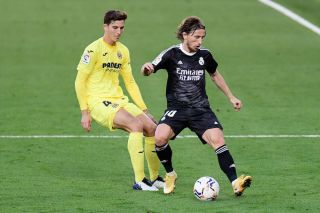 According to TEAMtalk, the Reds are not keen on paying over £60m for the Spanish defender which is what it would take to meet his release clause at Villarreal.

The report claims United are willing to ket a host of defenders go including Victor Lindelof, Phil Jones, Marcos Rojo and Eric Bailly.

That makes captain Harry Maguire and youth team graduates Axel Tuanzebe and Teden Mengi the only safe centre-backs at the club. Timothy Fosu-Mensah too… maybe.

United signed Bailly in 2016 for £30m, as per BBC Sport, but he has struggled to become a mainstay in the line-up in recent years, so it wouldn’t surprise us if he was headed towards the exit door.

Perhaps it would make sense — as the report from TEAMtalk points out — for United to tempt Villarreal to take back their former defender in 2021 and allow Torres go the opposite direction.

A swap deal like that makes perfect sense during the current transfer climate.

Bailly’s contract expires in 2022 and he’s been linked with a move away from Old Trafford.