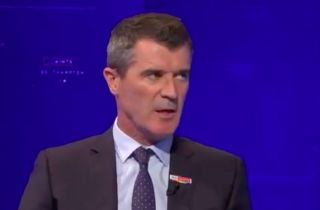 Roy Keane did not hold back in his criticism of Fred after the Manchester United midfielder conceded a free-kick that lead to Southampton’s second goal at St Mary’s.

But the goal was easily preventable as Fred hastily took down Moussa Djenepo just outside the penalty area.

Ward-Prowse has netted three direct free-kicks in the Premier League this season, and there is a sense of inevitably when the 26-year-old stands over a dead ball situation.

Roy Keane was furious with Fred in the Sky Sports studio at half-time, suggesting the Brazilian all but gave a penalty away with his ‘lazy’ decision.

Keane reiterated that he has been a long-term critic of Fred and that it was poor decision-making to haul Djenepo down within Ward-Prowse’s ideal range.

Listen to Keane’s thoughts on Fred below, via Sky Sports:

🗣"It is like giving away a penalty, I have been criticising Fred for years and my eyes don't lie to me, really poor decision, really lazy"

Roy Keane was not happy with Fred giving away the foul which resulted in James Ward Prowse's goal against Manchester United pic.twitter.com/C94OKutS8k

EDIT: Bruno Fernandes has offered United a lifeline by halving the deficit with half an hour to go.