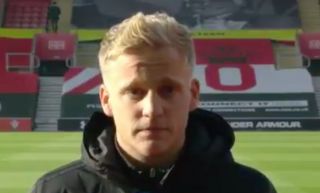 Donny van de Beek is ‘really happy’ to be making his first Premier League start for Manchester United against Southampton at St Mary’s.

The Dutchman has perhaps been a victim of his versatility in his early United career, failing to pin down a starting spot under Ole Gunnar Solskjaer.

But the summer signing from Ajax will finally get his chance in the league this afternoon after a series of impressive cameos and European performances. 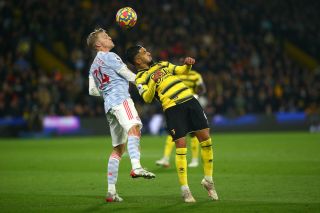 Van de Beek is likely to operate in a midfield diamond alongside Fred, Nemanja Matic and Bruno Fernandes.

He has admitted ahead of kick-off that he has had to be patient to finally get his chance but the 23-year-old will be desperate to make his mark.

See Van de Beek’s brief interview ahead of kick-off below, via Sky Sports:

🗣"Yes a lot, you always want to start, I can do that today, so I am really happy"

Donny van de Beek on his first PL start for Manchester United and having to be patient in waiting to start in the league pic.twitter.com/LFOMUdaXPt