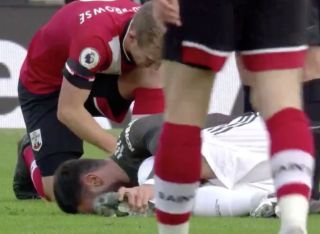 Bruno Fernandes was kicked in the warm-up by Nemanja Matic and just 12 minutes into today’s game he was floored by Southampton’s Oriol Romeu.

The former Chelsea midfielder went in hard on the Portugal international – a tactic I’m sure will be used more often as Fernandes proves to a big problem for every side United face.

Southampton have been second to most balls since kick-off, and this incident was no different with Romeu late into the challenge.

The Spaniard has a bit of a reputation for being a dirty player but I wouldn’t go as far as to say this was a reckless lunge, although he knew what he was doing…

Romeu got away without a yellow card.

Watch the foul below – footage courtesy of Sky Sports: