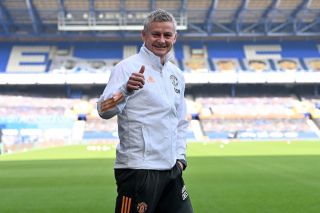 In these strangest of times at the end of a year like no other, it seems strangely fitting that Ole Gunnar Solskjaer’s only consistency is the inconsistency of his United side.

The league season may only be eight games old with United in the top half and ahead of old rivals Manchester City and Arsenal with a game in hand. But they have hardly convinced in getting there, scraping past Brighton and Crystal Palace and only putting Newcastle to bed in the last ten minutes. The Reds may have (finally) squeaked to their first home league win of the season on Saturday, but a highly fortuitous VAR-assisted 1-0 against a side hotly tipped for relegation was hardly reason to cheer.

This has largely been the case throughout Solskjaer’s tenure, as the Norwegian approaches the second anniversary of his caretaker appointment. He will soon be entering his third year as manager at Old Trafford. We had a very good hot streak when he first came in, one that led to him getting the job, and then another one between the post-lockdown resumption and the end of the protracted 2019-20 season. Otherwise, we’ve been more Jekyll and Hyde than Manchester United.

It makes the discrepancy between our Premier League performances and Champions League showings all the more baffling. Bar the blip of Istanbul, United have been magnificent in this season’s European assignment despite getting the hardest group, saving their best performances for the rigorous demands of the continent’s grandest stage. PSG – last season’s finalists – deservedly downed in Paris whilst Leipzig – semi finalists in 2019-20 and Istanbul, the Turkish champions, were left chasing shadows. United, all energy verve and clinical cutting edge, have made the Group of Death look easy and sit in pole position with nine points from twelve. Whisper it quietly, but United have carried the air of potential dark horses.

But why? Why is there such a contrast between the two? Why do we so often look clueless when faced with the massed defensive ranks of a West Brom or a Brighton, but so inspired against the likes of Neymar and Kylian Mbappe?

Is there something ingrained in this group of players that only comes to life when the last notes of the iconic, spine tingling anthem fade into the expectant air under the floodlights of a Champions League night? Perhaps we could persuade the league’s powers that be to play the music before our domestic games as well, just to see what happens.

It could be that some of United’s “big hitters” are more European in style, and so the Champions League brings out the best in the likes of Bruno Fernandes, Donny van de Beek and Paul Pogba. All three have come from other leagues overseas and perhaps find the step up in quality and prestige more to their skillset and liking. Van de Beek hasn’t had a look in domestically, but yet has looked right at home each time we’ve seen him in Europe. It’s made his Premier League absentia even more head-scratching. The Champions League seems to suit Van de Beek down to the ground, but then for a player schooled in the Ajax mentality of Total Football, that shouldn’t come as a surprise.

Solskjaer has tended to deploy two defensive midfielders in the league no matter the opposition, more often than not using Fred and either Scott McTominay or Nemanja Matic alongside him, to sit in front of the back four and the centre-backs of Harry Maguire and Victor Lindelof. He even did it against West Brom. He just doesn’t seem to 100% trust the capabilities of Messrs Harry and Victor and so thinks the best way to stop them getting exposed is by bringing in two defensive-minded players to babysit them.

Yet in Europe, we’ve seed both flexibility and fluidity from the 3-5-2 in Paris to the Leipzig diamond and Tuesday night’s ultra-attacking, high risk 4-2-3-1 with van de Beek and Fred behind a quartet of Marcus Rashford, Fernandes, Anthony Martial and Edison Cavani. It was a very forward-thinking line up and Solskjaer certainly seems willing to take risks and go for it more in the Champions League than he does in the league. Perhaps the manager feels under less pressure in Europe and sees the competition as more of a free hit. The Glazers won’t care how United do in the Champions League as long as we qualify for it. Top four is the minimum Premier League expectation, whereas there is little to no expectations when it comes to the continental competition. European games tend to be slower and more tactical, allowing the coaches to set United up differently with a view to front-foot attacking.

This allows Solskjaer to flex his muscles a bit and opt for a bolder approach than he might otherwise have done. Maybe it’s down to something as simple as his personal affinity and love affair with the competition that secured his name in club folklore rubbing off on the players.

You don’t need to be consistent to have a chance in the Champions League. The unique nuances of the competition make each game almost a one-off cup tie – and United have been very good in those situations. We’re strong against big sides, have a decent cup record in recent years and Solskjaer has proved he can beat the best.

It’s not something I can really put my finger on and perhaps even Solskjaer himself cannot explain the contrast.