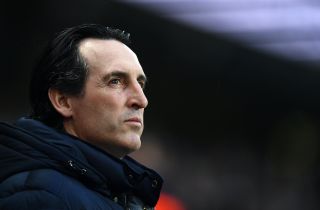 Villarreal manager Unai Emery has spoken out about the speculation surrounding winger Samuel Chukwueze claiming that the Spanish club are ‘happy’ with the Nigerian.

Chukwueze, 21, joined Villarreal’s youth academy in 2017 from Nigerian club Diamond Academy for a transfer fee of just £450,000, as per Transfermarkt.

Since his arrival in Spain three-years ago, Chukwueze has emerged as one of Europe’s brightest talents after forcing his way into Villarreal’s senior first-team.

The 21-year-old winger has so far featured in 90 matches in all competitions and has been directly involved in 25 goals.

Despite having another three-years on his current deal, the exciting wide-man has been tipped with a sensational move with the likes of United and Everton all linked, as per 90 min.

It has been previously reported that Villarreal have recently renegotiated a new deal with Chukwueze which has seen his minimum release doubled amid the long line of potential suitors.

However, the latest in the ongoing saga comes directly from his manager Emery who has been speaking ahead of Villarreal’s Europa League tie against Maccabi Tel Aviv.

When asked in a pre-match press conference by Nigerian reporter Babatunde Ojora, as quoted by Manchester Evening News, Emery said: “We are happy with Samuel Chukwueze, he’s growing up here with us and his performances are getting better little by little but above all we want to achieve with him our objectives with his skills, his capacity.

“He is young and he has a very good future and then trying to add his performances for our team, for the national team, maybe in the future he can go to another league to grow up more but I think he’s very happy here with us, and every match with him is very important to try to get best performance with him.”