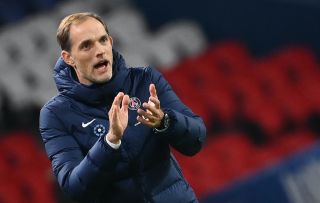 Paris-Saint Germain manager Thomas Tuchel has hinted at how he plans on lining his side up against Manchester United when the two giants clash for a second time in the Champions League group stage next week.

United took all three points away from the Parc des Princes when the two sides met last month in a match which saw United win 2-1, however, Tuchel thinks he may have learnt from his side’s previous mistakes.

Group H remains notoriously tight as both RB Leipzig and Paris-Saint Germain sit on six points with United top of the table on nine.

However, with all three sides set to face-off against one another, the group remains wide open.

Ole Gunnar Solskjaer will lead his Red Devils into next Wednesday exciting clash in good form having won all three of their last three matches in all competitions.

Elsewhere, Paris-Saint Germain are in patchy form to say the least. After beating RB Leipzig 1-0 earlier this week, the Ligue 1 giants are now two wins from their last four in all competitions.

Paris-Saint Germain’s return fixture against United at Old Trafford next Wednesday will see Tuchel hope to execute some revenge on the Reds.

Speaking after his side’s recent 1-0 win over RB Leipzig about the upcoming match against United, as quoted by Daily Star, Tuchel said: “The hardest part will be finding eleven players who have the physical impact to give.

“These are important things. We are thinking of the match before against Bordeaux; we will prepare the match and a plan against Manchester then.

“If the players feel better, if it’s easier for them, we can play a better game.

“We will do what is necessary, but I have confidence. If we still have to defend low, we will.”

Wednesday’s exciting match is scheduled to kick-off at 8pm UK time and will be broadcast live from Old Trafford.