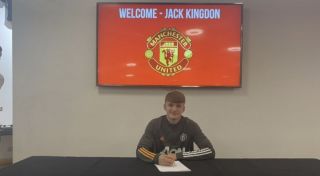 Youngster Kingdon, 15, who operates primarily as a centre-back confirmed his switch from Morecambe’s youth academy to United’s on his social media late on Wednesday evening.

I’m very honoured & proud to be a part of this special club @manunited 🔴🔴🔴 pic.twitter.com/uWn1IG48dU

Impressively, the young defender also holds the record for the fastest 300m sprint which he broke twice in one day whilst competing in Greater Manchester’s athletics.

A year ago today I broke the 300M record, twice in one day 💪 🏃‍♂️💨 @TURTONPE @timehop @gmcsfa @GmcsfaC @WorldAthletics pic.twitter.com/ecRVfFowYm

Kingdon, who has already become a regular to under-18s football after making his debut for Morecambe’s youth side back in August 2019 will go straight into United’s under-16s side.