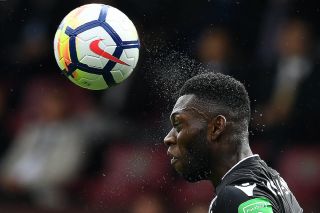 Fosu-Mensah, 22, is fast approaching the end of his current deal which is set to expire next summer.

Despite joining the Reds in 2014 from Ajax’s youth academy, the Dutch defender who can play as either a centre-back or a full-back has only managed to make 29 apperances for the club’s senior first-team.

However, a clear indication that the Reds could be willing to gift the 22-year-old more game-time comes as Manchester Evening News report that the club have offered the defender a new deal.

According to MEN’s recent report, manager Ole Gunnar Solskjaer is keen to see his Dutch defender remain at the club amid speculation Fosu-Mensah could agree a pre-contract with another club as early as the new year.

The Reds are seriously lacking squad depth in the right-back position after back-up Diogo Dalot was allowed to join AC Milan on a season-long loan earlier this year.

However, MEN claim that Solskjaer has been impressed with the 22-year-old’s training levels and with regular right-back Aaron Wan-Bissaka seemingly picking up a knock against Istanbul earlier this week, Fosu-Mensah could be expected to step-up.

Read more: Fans will not be returning to Old Trafford yet as UK Gov place Manchester in tier 3