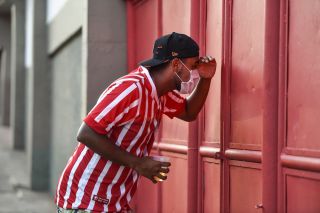 The UK Government led by Prime Minister Boris Johnson have placed Manchester into tier 3 as part of their winter COVID-19 plan.

Manchester is one of six UK areas to be placed in the highest tier; other areas include Hull, Kent, Newcastle, Birmingham and Wolverhampton.

It is understood that as part of the Government’s plans to reintroduce spectators back to football grounds up and down the country the tiered system will help decide each stadium’s capacity.

However, sadly, football in tier 3 areas will be forced to continue to be played behind-closed-doors which of course means Old Trafford will remain empty for the foreseeable.

It has been confirmed, as per BBC that Manchester shall remain a tier 3 area over the winter period, despite COVID-19 cases recently falling.

The plans will effect daily life outside of elite sport with tier 3 restrictions also including:

– No household mixing indoors or outdoors.
– Rule of sex applies in outdoor public spaces.
– Pub and restaurants closed with the exception of delivery and takeaway services.
– Indoor entertainment venues closed.
– Travel restrictions in and out of the area.