Once a Red, always a Red.

Rafael da Silva loves Manchester United and it’s a shame he wasn’t able to receive the warm reception he deserved from a packed Old Trafford crowd on Tuesday night.

The Brazilian right-back, who gave nothing but his best in a red shirt, returned with Istanbul Basaksehir but couldn’t make a key difference in a 4-1 defeat for the Turkish side.

Victory for Ole Gunnar Solskjaer’s side puts them back in control of their so-called ‘group of death’ that also includes Paris Saint-Germain and RB Leipzig.

Bruno Fernandes, Marcus Rashford and Daniel James netted the goals on a comfortable evening in Manchester as the Reds got revenge on their embarrassing defeat earlier in the month.

Rafael caught up with MUTV at the full-time whistle and confirmed he will now be back supporting the Reds.

He described Ole Gunnar Solskjaer as a ‘good manager’ and hopes United can get ‘all the wins they need’ in the future.

The 30-year-old then posted a heartwarming message to his former club on Instagram:

“Just hope the best for you and Manchester United keep fighting my friend like you are doing. All the best @manchesterunited thank you for the warm welcome before and after the game. Love you all .”

Rafael won three Premier League titles in his seven-year spell at Old Trafford before being sold to Lyon in 2015. 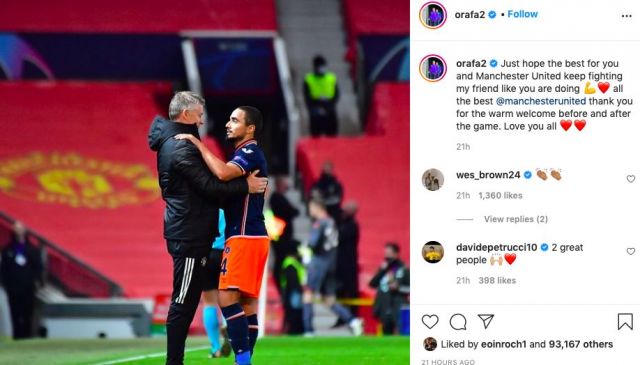