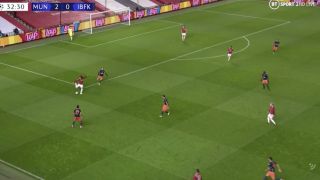 Lindelof’s ball which came virtually from a David De Gea goal-kick travelled moreorless the length of the entire Old Trafford pitch to reach the path of Rashford who went down under a challenge from Bolingoli.

Rashford’s drawn foul won United a penalty which he later successfully despatched himself after midfielder Bruno Fernandes passed up the oppotuntity to bag a first-half hat-trick.

United currently lead 3-0 as the break edges closer in what has been one of the Reds’ best 45-minutes since Ole Gunnar Solskjaer took charge.