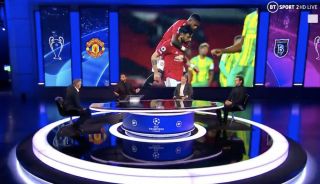 Former Manchester United defender turned BT Sport pundit, Rio Ferdinand, believes his old club desperately lack a leader or somebody on the pitch who can collar the likes of Bruno Fernandes when he gifts possession away.

Fernandes has recently topped the Premier League’s chance creation list on 26 from just eight domestic games, however, Ferdinand believes the whole side would benefit from a player who calls out mistakes when they do happen.

Speaking ahead of the Reds’ important Champions League tie tonight against Istanbul, Ferdinand who sat alongside fellow legends Paul Scholes and Owen Hargreaves thinks a lack of leadership is United’s biggest on-field problem.

“They are not leaders. Being brutal, I don’t see anybody who is going to ruffle feathers.”

“Man Utd are suffering from that.”@rioferdy5 wants to see players holding each other to higher standards on the pitch 😤 pic.twitter.com/C6dYJ5cT9s