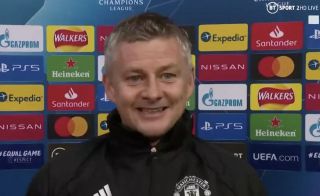 United continue to sit top of Group H on nine points with just two games remaining and although Solskjaer thinks 10 points should be enough to see his side through to the knockouts, admits they want to win their group.

An early Neymar Jnr penalty in the other fixture in Group H saw Paris-Saint Germain beat RB Leipzig 1-0 which has tightened the group up even further.

Paris-Saint Germain and RB Leipzig both now sit on six points each with Istanbul seemingly out of the running on three.

United are set to host Paris-Saint Germain next Wednesday before meeting RB Leipzig on December 8.

However, speaking after tonight’s game, Solskjaer refuses to play it safe and insists he wants to top the group outright.

“If Bruno wants to give it to Marcus, so be it. Why not?”

“We need one more point, but we want to top the group!”

Ole Gunnar Solskjaer was happy with his side’s performance as Man Utd took another step towards the Champions League knockout stage.