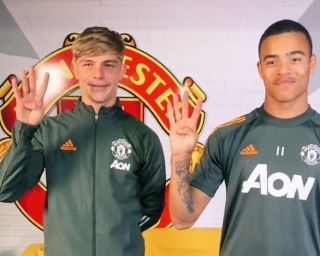 Manchester United are on TikTok – a social network for sharing user-generated videos, mostly of people lip-synching to popular songs and pretending to dance.

A number of football clubs have signed up, including United, to help reach out to a younger audience. Though I’m sure there’s a number of adults secretly scrolling through a feed and seeing it as their guilty pleasure.

The latest from Manchester United on TikTok sees two academy graduates challenge one another.

Asked questions like ‘put your finger down if you’re the best TikToker’, Mason Greenwood and Brandon Williams are put to the test.

Greenwood wins the challenge – but I don’t suspect Williams to suffer from any sleepless nights as a result.

We know this won’t be everyone’s cup of tea but it’s the way in which football clubs are heading.