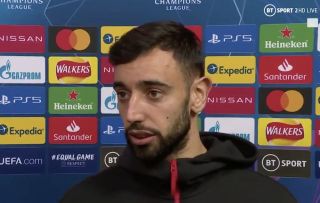 Manchester United midfielder Bruno Fernandes put in a simply sublime performance against Istanbul tonight with his two first-half goals setting the tone for the remainder of the game. However, a penalty before the break had fans suspecting Fernandes would bag a hat-trick, but instead of taking the spot-kick himself, the Portuguese star gifted the ball to Marcus Rashford.

Fernandes, who was subbed off during the 59th-minute in place of teenager Mason Greenwood failed to secure a well deserved hat-trick, however, speaking after the game, the 26-year-old has explained why.

United’s creative superstar opted to hand team-mate Rashford the chance to score from the spot and has revealed that he promised the Englishman that he would let him take the next spot-kick.

Fernandes also went onto explain how important he believes it to be that Rashford continues his impressive Champions League goal-scoring run.

“After the last game I told Rashy he could take the next one, and I remembered.”

“It doesn’t matter who takes the penalties. The team scores.”