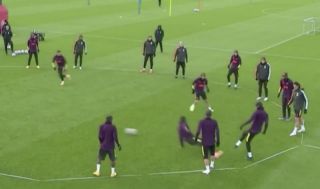 Manchester United centre-back Eric Bailly was spotted making a tasty looking lunging challenge on a team-mate during a team training session ahead of tonight’s Champions League match against Istanbul Basaksehir.

Bailly, 27, who is known for his flamboyant and unpredictable nature certainly lived up to his hype during a recent training session.

Ole Gunnar Solskjaer is currently preparing his Reds to compete in their fourth Champions League group game later tonight and he will certainly be relieved that his enthusiastic defender hasn’t caused any lasting damage.

It is not clear who the team-mate is, but whilst in the middle of a Rondo training exercise, Bailly went flying into a challenge and was lucky not to seriously catch his United colleague.