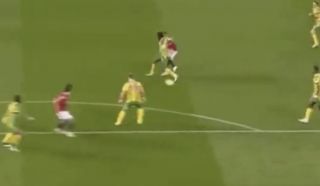 United went onto beat Slavan Bilic’s Baggies 1-0 last weekend, however, despite VAR taking all the talking points, arguably one of the best moments of the match has gone largely unnoticed.

As United are currently preparing to host Istanbul in tonight’s Champions League fourth group match, Ole Gunnar Solskjaer will be hoping for more of the same from his two big names, who both start this evening.