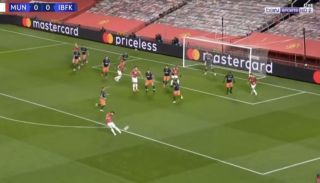 Bruno Fernandes has scored an absolute rocket to open the scoring in tonight’s Champions League group game against Istanbul Basaksehir.

United’s Portuguse midfielder has nearly taken the net off it’s hooks with a superb strike which came off the back of an Alex Telles corner.

It doesn’t get much better than this.

Fernandes now has a whopping 33 direct goal involvements in just 34 (and a half) matches; a truly remarkable feat.

Fernandes’ early goal heroics have given the Reds the lead in tonight’s important Champions League group game which, should it stay this way, will see United edge closer to the competition’s knock-out round.

Bruno Fernandes is ON FIRE 🔥

First-time. On the bounce… The keeper never stood a chance!