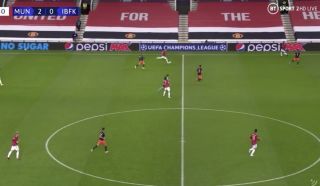 Manchester United new-signing Alex Telles has produced a moment of magic after dropping his shoulder to beat his man and play a brilliant, pin-point cross-field ball to team-mate Marcus Rashford.

Telles, 27, joined United earlier in the summer but after a bad run of luck at the hands of the ongoing COVID-19 pandemic has struggled to feature since his arrival.

However, now back and able to play, the Brazilian attacking left-back is exciting fans all around the world as he continues to showcase some irresistible offensive play.

Telles’ latest contribution came during the first-half of tonight’s Champions League match against Istanbul after he played a brilliant long-range pass to Rashford.