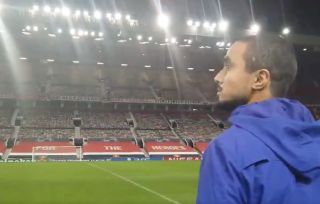 Back to familiar surroundings for Rafael Da Silva.

Rafael Da Silva was a fan favourite at Manchester United and still to this day on social media he talks about his former club with a great degree of admiration.

Just like his predecessor, Gary Neville, the Brazilian loved a scrap and was renowned for his feisty and aggressive playing style. Rafael would wear his heart on his sleeve and famously confronted former team-mate Carlos Tevez during a Manchester derby in 2010.

Currently playing for Istanbul Basakeshir, Rafael was part of the team that beat United three weeks ago to mark our first defeat in the competition this season after beating Paris Saint-Germain and RB Leipzig.

The Red Devils will be aiming to get back to winning ways tonight, but Rafael is clearly excited to introduce his current team-mates to the Theatre of Dreams.

Istanbul Basaksehir shared a video on Twitter this morning of Rafael walking onto the turf at Old Trafford.

In the short video clip below, Rafael says: “The Theatre of Dreams. What a nice feeling to be here again. Let’s go boys!”

As much as we all love Rafael at Stretty News, we hope he is part of the losing side later on.