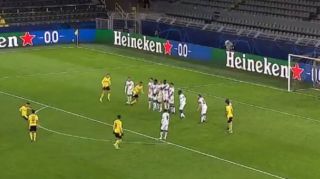 Two Manchester United targets were on the scoresheet as Borussia Dortmund brushed aside Club Brugge in the UEFA Champions League.

Erling Haaland scored twice and became the fastest player ever to net 15 Champions League goals. He did so in 12 games — seven fewer than the previous record held by Ruud van Nistelrooy and Roberto Soldado.

The Norwegian striker, linked with a move to Old Trafford via Manchester Evening News, claimed the 2020 Golden Boy award last week and is clearly destined for better things in the game.

England International Jadon Sancho made it 2-0 with a curling, 20-yard free-kick, straight into the top corner.

Top bins as the kids say!

Check out Sancho’s goal below – pictures courtesy of BT Sport:

Sancho puts a free-kick in the definition of top bins. You don't save those! 🎯 pic.twitter.com/oE8jCed884

A report from 90min claims United could make a move for Sancho in January after missing out on signing him last summer.