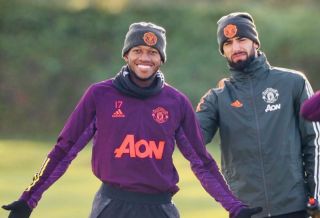 Having lost last time out against the Turkish champions, Ole Gunnar Solskjaer and his players will be more wary of their opposition tonight. A serious attempt needs to be made to avoid any embarrassing defensive mishaps like we seen three weeks ago in Istanbul.

Two mainstays in the team this season — Fred and Bruno Fernandes — have been pictured joking around at Carrington training complex.

See below as Fred uploaded the following to Instagram along with the caption: ‘I’m styling, bro!’

Fernandes doesn’t look very impressed with Fred pulling his shorts up extra high and using them to tuck in his training jumper.

The fashion police will catch Fred if he isn’t lucky! 😂