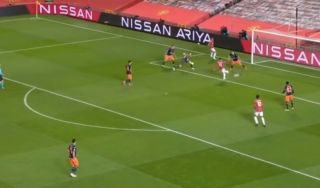 Bruno Fernandes scored his second goal of the night against Istanbul Basaksehir with what will probably go down as the easiest goal he’ll score as a footballer.

Istanbul Basaksehir’s goalkeeper had a howler as he allowed the ball to drop inside the box and fortunately in Fernandes’ path.

The Portugal international was never going to miss from so close out, especially after his first goal of the night was a half volley from outside the box.

Edinson Cavani deserves credit for his attempt to win a header. It put off the goalkeeper, who still should have done a lot better.