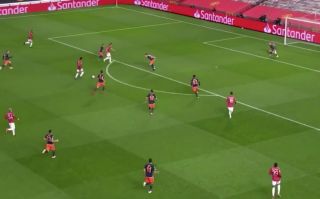 Manchester United had a great chance to open the scoring just two minutes into the game at Old Trafford tonight.

Marcus Rashford went on a mesmerising run into the Istanbul Basaksehir box just minutes after kick-off.

In hindsight, he may wish he took a shot earlier or passed the ball out wide, but Rashford did tremendously well to dance around Istanbul’s defence.

It’s great when players like Rashford run at defenders because we know that is what he does best. When he’s in this sort of form we can expect goals.

I’d be very surprised if he didn’t add to his tally for the season tonight.

Bruno Fernandes has just opened the scoring with an incredible half volley outside the box.