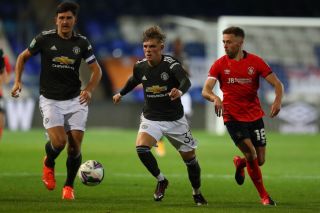 Williams is yet to make a league appearance for the Reds this season and has been restricted to just two League Cup starts.

The arrival of Alex Telles has pushed the England U21 international down to third in Ole Gunnar Solskjaer’s left-back pecking order.

Williams, who made a superb breakthrough to the first-team squad last season, was an unused substitute as Telles played in Saturday’s unconvincing 1-0 victory over West Brom at Old Trafford.

But he could be selected against Istanbul Basaksehir in the Champions League group stages on Tuesday if Solskjaer opts to rotate his full-backs with Luke Shaw out injured.

Anyhow, the United academy graduate has not progressed as he would have liked early on this season and The Athletic reports that several clubs, namely Southampton, are keeping a close eye on his situation.

The Athletic note that the 20-year-old was open to a loan move to St Mary’s in the summer transfer window but the move was blocked by Solskjaer who assured him over his importance to the squad.

It is added that Saints boss Ralph Hasenhuttl wants to sign another full-back and Williams is viewed as a versatile player who could strengthen their defensive options.

It would be very surprising to see United sanction a move for Williams as he could become increasingly important in the coming months with the congested fixture schedule forcing rotation.

But Williams is likely to feel frustrated at his lack of game time so far this term and could seek a temporary exit in January.