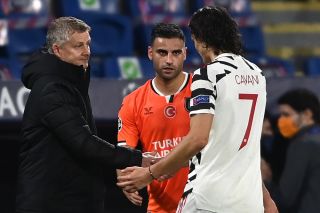 Three weeks ago Manchester United suffered a first UEFA Champions League defeat of the campaign after Istanbul Basaksehir claimed a 2-1 win in Turkey.

Tomorrow night the two sides meet again and United manager Ole Gunnar Solskjaer addressed the media this morning to outline what he expects from his side in their upcoming game.

Demba Ba and Edin Visca scored in the opening period of the last game and, even though Anthony Martial headed home on the brink of half-time, United were unable to break the Turkish side down and our opponents registered their first points in Group H.

After already beating Paris Saint-Germain and RB Leipzig in the group stages, this was an unexpected result for the Red Devils.

But the lads can set the record straight on Tuesday night by beating Istanbul. Our form at Old Trafford hasn’t been very good but there will be no excuses if United fall short on the night.

“The Turkish champions, you know it will be difficult,” Solskjaer told the press, as per Manchester Evening News. “Nothing unexpected, but level of concentration needs to be better. Goals we conceded, we caused our own problems with our organisation. We need to be more patient, disciplined in our position.”

While I didn’t want to remind you all of that first goal we conceded in Turkey, scored by former Chelsea striker Demba Ba, but the defending on show for that was amateurish. The players shouldn’t require instruction to avoid goals like that at this level and the boss is spot on blaming it on lapses in concentration.

Asked about United’s response since then, Solskjaer said: “We played really well against Everton, won against West Brom with a clean sheet. Of course we want to carry on.”

Solskjaer was also quizzed on how United have struggled to break down smaller teams such as Istanbul Basaksehir.

He added: “We are trying to develop the squad and the team to become good at all different phases of the game. Everton was perfect example. The game decides what type of game it becomes, first goal etc. Always decided on moments and we are moving in the right direction.”