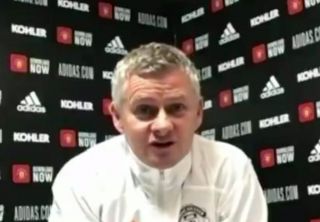 Ole Gunnar Solskjaer was under no illusions about Manchester United’s performance levels in the 1-0 victory over West Brom at Old Trafford.

Bruno Fernandes’ penalty secured United’s first home league win of the season, and the Reds leapfrogged Man City in the table after Pep Guardiola’s side were defeated at Tottenham Hotspur.

But the scoreline didn’t tell the whole story and United were perhaps fortunate to get three points in a mediocre showing where attacking intensity was lacking.

West Brom had a contentious penalty overturned for a coming together between Fernandes and midfielder Conor Gallagher.

The Reds also rode their luck as David de Gea was called into action several times as the away side threatened on the break.

On reflection, Solskjaer believes referee David Coote and his officials came to the right conclusion with each key decision in the match.

The Norwegian boss was ‘delighted’ with the victory but admitted the performance levels were ‘way below par’.

Anyhow, United have back-to-back wins for the first time this term and will look to build momentum as we head into a crucial winter period.

Listen to Solskjaer assess the game in the post-match press conference below, via Sky Sports:

🗣 "The officials made the three right decisions"

Ole believes the officials made the right call with the key decisions against West Brom pic.twitter.com/22Jipbv0Iv