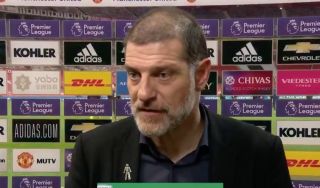 Yesterday’s meeting at Old Trafford had no shortage of controversy.

Slaven Bilic was rightly aggrieved at full-time over a penalty West Ham had overturned in the second half, just minutes before Manchester United were awarded a penalty of their own and scored the game’s only goal.

The West Brom boss wasn’t happy after the game. They came to Old Trafford, kept tight and solid throughout and should’ve had a penalty.

Bilic believes his side were hard done by with the decision made in his side’s Premier League meeting against United.

“All those crucial decisions went against us,” Bilic told BT Sport after the match.

“For me, the penalty on Conor Gallagher is a clear penalty.”

"All those crucial decisions went against us."

"For me, the penalty on Conor Gallagher is a clear penalty."

Do you agree? Let us know in the comments section.

One response to “Video: Slaven Bilic believes West Brom were hard done by vs Man Utd”