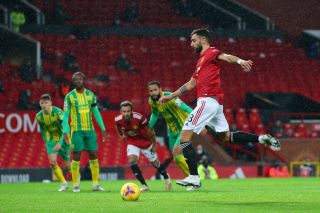 Ian Wright believes football’s lawmakers should prevent penalty takers such as Bruno Fernandes from jumping in their run-ups.

Fernandes is an advocate of the tactic as we’ve seen since his arrival in January, and to great success too.

Perhaps the real reason behind Wright’s frustration stems from Fernandes being so good at penalties. The Portugal international has already overtaken Denis Irwin for penalties scored in a United shirt.

Wright’s argument is that it confuses goalkeepers when the penalty taker jumps before kicking the ball, but surely every keeper knows Fernandes is going to do it at this rate?

The former Arsenal man feels that keepers have it “difficult” in the face of the uncertainty posed by penalty takers.

“It is [difficult for goalkeepers],” Wright told Match of the day (via MEN).

“And then you’ve got forwards jumping up, doing this, doing that sort of stuff and the goalie can’t move his feet off [the line].

“They should stop people jumping and that, they should have to make a full… just run at the ball and hit it. If they can move and the goalies can’t, that’s not fair.”

What about keepers dancing around the penalty line like Jerzy Dudek did in the 2005 UEFA Champions League final against AC Milan? He did so but had to stay on his line when the ball was kicked for each penalty kick.

In sport you put off an opponent and it’s fair game when it works both ways, right? It’s a competitive game and Fernandes is hardly cheating!

Read more: Manchester United 1-0 West Brom: Three things we learned as VAR got it spot on