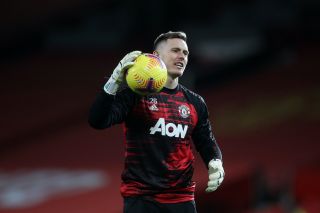 Dean Henderson has an objective to make the England squad for the European Championships next month and the latest suggests he ‘would like a loan move away’ from the club in order to push for that.

Although the 23-year-old has struggled for game time so far this season with Ole Gunnar Solskjaer standing firmly with David de Gea, I think he’s in with a shot of being England’s No 1 by the time the tournament kicks off.

That could be dependant on what happens in January when the transfer window reopens, but Henderson can’t stake his claim whilst warming the bench at Old Trafford. Not if he wishes to be Gareth Southgate’s first choice.

Henderson made his senior England debut during the November break in. 3-0 friendly win over the Republic of Ireland.

This season he’s been restricted to just two appearances for United in the Carabao Cup and the 2-1 Champions League defeat away to Istanbul Basaksehir.

And, according to The Sun, Henderson would like another loan move away from Old Trafford in January. Leeds United and Brighton and the two clubs linked to the goalkeeper.

The stopped signed a contract keeping him at United until 2025 back in August.

This season Henderson has pushed Sergio Romero down the pecking order.

Read more: Marcel Brands is being courted by Manchester United for DoF role