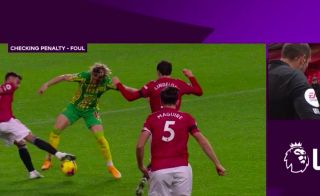 West Brom have been controversially denied the chance to take the lead against Manchester United at Old Trafford.

The Baggies were rewarded a spot-kick just after half-time when Bruno Fernandes was adjudged to have caught Conor Gallagher in the box.

David Coote had no hesitation in pointing to the spot in a decision that has divided opinion on social media.

But after being advised by VAR to check his pitch side monitor, United were given a reprieve as the decision was overturned.

Moments later, David De Gea kept out Conor Townsend as the away side applied early pressure in the second-half.

EDIT: United have taken the lead minutes later through a Bruno Fernandes penalty.

The Portuguese playmaker’s first spot-kick was saved but Sam Johnstone was ruled to have been off his line, and Fernandes made no mistake on his second attempt.