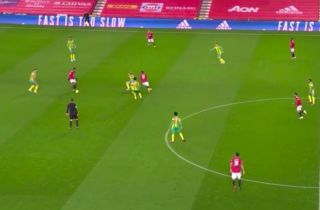 Fred’s commitment to the cause has never been in doubt at Manchester United but his ability on the ball often comes into question.

The Brazilian is becoming almost undroppable under Ole Gunnar Solskjaer at Old Trafford and that can be accredited to a vast improvement in possession.

Fred highlighted his confidence on the ball with some tidy interplay in the early stages of United’s Premier League clash with West Brom.