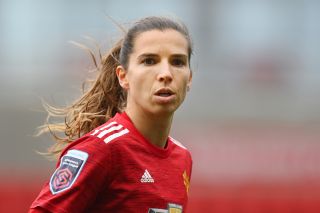 Tobin Heath has been nominated for the FWSL player of the month.

The USA international recently joined Manchester United Women on a one-year deal after spending the last seven years with Portland Thorns, as well as two campaigns with Paris Saint-Germain.

The 32-year-old was brought into Casey Stoney’s side to bring a wealth of experience, including 168 international caps for the US Women’s National Team and an honours list that includes two World Cups and two Olympic gold medals.

She is up for an award already after being nominated for the FAWSL player of the month, the only Manchester United nominee this time around.

🚨 It’s time to vote for your @barclaysfooty Player of the Month!

Tobin celebrated her goal against Man City in last week’s Manchester derby by tapping the United badge. Her goal gave United a boost towards their equaliser as the game finished 2-2.

Manchester United Women are currently on top of the WSL.