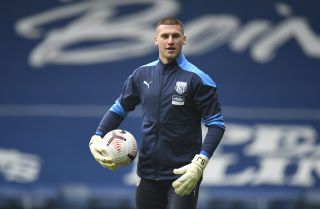 The goalkeeper signed for West Brom following their relegation from the Premier League, but they’re back in the top flight so it’s nice being able to see Johnstone perform more often — and even against United this weekend.

A successful loan spell at Aston Villa led to a transfer to the Baggies. He was aware of the fierce competition for keeping spots at Old Trafford and that without any doubt contributed to his decision to leave the club.

I don’t blame him for that.

Johnstone had seven loan spells during his 15 years at United, but playing time was always going to be limited given David de Gea was one of the world’s best goalkeepers at the time.

Still, despite never making a senior appearance for United, Johnstone knew he could learn from De Gea…

In a brilliant interview with WBA TV, Johnstone discussed his career to date, and the 27-year-old reserved special praise for United and the impact of De Gea.

He also reveals that the Spaniard sent him a classy message last year.

“Just watching him every day, everything, in the gym, just around the place, training, before games, when we travelled, very relaxed and very confident in his own ability and obviously very good.

“Warm ups, watching him — you can’t get much better than that, learning from him every single day.

“Great person. We still keep in contact now, he did message me last year and he was like ‘I want to see you in the Premier League’ – it’s nice to get messages like that.

Dean Henderson will probably have something similar to say when he reflects on his time working with De Gea at Carrington.

Although he’s had his difficult times between the posts for United, we as fans should get behind De Gea in hope he gets back to those dizzy heights when he was the best keeper in the world.

It could be a saving grace for Solskjaer, who will want to see a clean sheet this weekend.

Read more: Major concerns for Man United as Edinson Cavani in COVID-19 isolation whilst away with national team