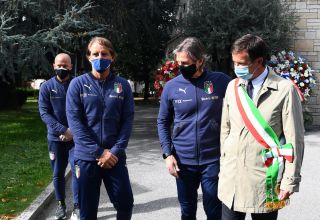 It feels like a day can’t pass where Solskjaer’s future in the Old Trafford dugout isn’t being speculated, however, after a recent upturn in form, speculation that the Norwegian could be set for the door has somewhat cooled.

Solskjaer came under immense pressure during the early stages of the new 2020-21 campaign after a shock opening day 3-1 defeat to Crystal Palace was soon followed up with a 6-1 hammering against Spurs.

Things didn’t get much better for Solskjaer after losing 2-1 to Istanbul Basaksehir in the Reds’ third Champions League group game, however, a recent 3-1 win against Carlo Ancelotti’s impressive Everton has lifted some pressure.

According to a recent written report from Tuttosport (via Sports Witness), United have continued in their search for possible managerial replacements with Mancini among the list of names considered.

Tuttosport’s report suggests that Mancini is unlikely to leave his position as Italy’s head coach due to an impressive run of form and especially with next year’s Euros fast approaching.

It is understood that both Paris-Saint Germain and United are among some of the latest big names to consider Mancini with Juventus reportedly eyeing the Italian prior to hiring Andrea Pirlo.

Tuttosport claim that Mancini’s ambitions of succeeding with the national side are not driven by financial reward as the former City boss earns around £2.7m-per year, whereas the likes of Solskjaer is reportedly on £6.7m-per year.

Given Mancini’s desire to guide Italy to glory, it would be reasonable to assume that both Paris-Saint Germain and United will need to cross the Italian off their interview list.