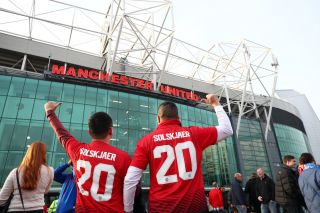 Now the disrupting and rather annoying international break is out of the way, Manchester United will be preparing to host West Brom at Old Trafford in the Premier League on Saturday.

United come into the weekend’s domestic clash in 14th place on 10-points, however, the Reds have played a game less than 16 other sides in England’s top-flight.

Elsewhere, West Brom will be hoping they can use United’s poor home form as a way to clamber out of the league’s drop-zone. The Baggies have failed to win a single domestic game yet and will hoping they can pull off a major upset when they travel to the North West on the weekend.

Ahead of the Reds’ next Premier League match, we have looked at how Ole Gunnar Solskjaer could line his side up:

The Spanish number-one has been in fine form this season and will be starting in between the sticks again against West Brom.

Easily the club’s first-choice right-back. Wan-Bissaka will get another start on the weekend.

With team-mate Victor Lindelof reportedly struggling with a minor injury, this could be the perfect oppotuntity for Solskjaer to award United’s 23-year-old with another start.

Club captain who has been in great form for England whilst on international duty, Maguire will undoubtedly start at centre-back, it’s just a question of who will partner him.

With Luke Shaw out with a hamstring injury, Telles should be recalled to the starting line-up in his place.

Arguably been United’s best player so far during the new 2020-21 season, the Brazilian is quickly becoming one of the first-names on the team sheet. I think we’ll see Fred tasked with controlling the midfield hub again on the weekend.

The Pogba rumour mill is in full swing and despite a terrible patch of form, I think Solskjaer could very well end up sticking with his French midfielder for the game against West Brom.

The Baggies have a notoriously strong and industrious midfield and Pogba could be brought in to try and match Slavan Bilic’s physical men.

Scored again whilst on international duty with Holland, the versatile midfielder will be desperately unlucky to miss out on a starting spot on the weekend.

The youngster has recently returned to training after being dropped from the squad for his side’s last game against Everton.

However, with the likes of Marcus Rashford ruled out with injury and Anthony Martial currently training alone, I would expect Greenwood to be recalled back to the starting line-up against West Brom.

Should start but COVID-19 concerns whilst away with Uruguay may prevent him from doing so. The South American will be eagerly awaiting to learn whether or not he’ll have to self-isolate for a second time.