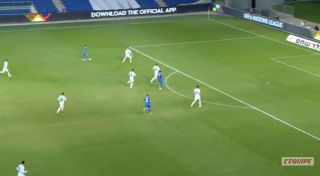 McTominay, 23, is in international action for his native Scotland tonight but whilst playing at centre-back, the United midfielder failed to cover himself in glory.

McTominay was turned inside out as Soloman ran at him which eventually left the Scotsman wrong footed and seemingly unable to recover.

There was murmurings among selections of fans who suggested the 23-year-old could fill in at centre-back for his club side, although, having seen his first-half display against Israel, perhaps a midfield role is best, for now.