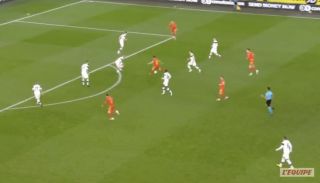 James, 23, who is in action tonight for Wales has scored an absolute peach against Scandinavian side Finland to give The Dragons a 2-0 lead.

United’s young attacker has come under immense pressure during recent times after a series of underwhelming performances have seen the Welshman fall out-of-favour with Ole Gunnar Solskjaer.

However, the young forward looks to be having a much better showing tonight and is clearly doing all he can to force his way back into his club’s first-team plans.