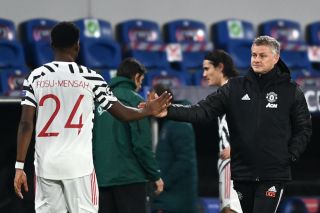 Timothy Fosu-Mensah is reportedly considering his future at Manchester United ahead of the January transfer window.

Fosu-Mensah, 22, is one of a number of peripheral defenders struggling to find a way back into Ole Gunnar Solskjaer’s first-team squad.

The Dutch youngster is out of contract in the summer and the Manchester Evening News report that he is weighing up his options at Old Trafford.

Solskjaer surprisingly brought Fosu-Mensah back into the first-team fold last season after three injury-hit years including loan spells at Crystal Palace and Fulham.

He was given a vote of confidence by the United boss in the run-in last term as he was selected at left-back ahead of Diogo Dalot.

And Aaron Wan-Bissaka’s lack of match fitness enabled Fosu-Mensah to start United’s first league game against Palace but he disappointed at right-back.

He has only made one appearance since and has been left out of the last five Premier League match day squads, so a desire for an exit to kickstart his career would be completely understandable.

Meanwhile, the MEN’s report adds that surplus squad players Sergio Romero, Phil Jones and Marcos Rojo could all be sold when the January window opens