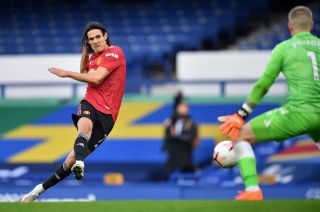 Cavani, 33, joined United on deadline day during the summer transfer window in a free transfer after the elite striker’s contract with Paris-Saint Germain expired earlier in the year, the deal was confirmed on ManUtd.com.

Upon his arrival, Cavani was forced to miss a handful of his new club’s games due to being required to self-isolate due to COVID-19 protocols, however, after making five appearances, the South American recently opened his United account against Everton.

However, now on international duty with his native Uruguay, United will be fearful their new-striker can return back to domestic action without being required to endure a second isolation period.

Although, with the news that is coming out of South America, that may not be possible.

Earlier this week, news broke that Matias Vina tested positive for COVID-19 which caused initial concern, however, the latest in the rapidly developing situation comes from El Observador (via Sports Witness).

The South American news outlet claim that Cavani, along with his international team-mates are currently all in isolation in a hotel after seven squad members tested positive for the novel virus.

The report does not make it clear if the Uruguay staff and players will need to go through another round of testing, but the national team is expected to be forced to stay away longer than other nations who are already preparing to head back to their club sides.