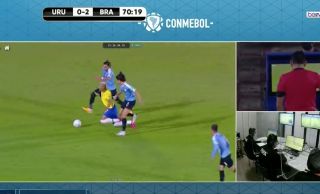 Edinson Cavani made a questionable tackle on his Brazil opponent, with the referee turning to VAR before issuing a straight red card.

The 33-year-old was shown the red card mid-way through the second half for making a dangerous challenge on Brazil and Everton striker Richarlison.

Cavani used his studs and made significant contact with Richarlison’s shins in a reckless manner, so it’s not a tackle we should be trying to excuse.

The referee used the pitch-side screen before sending off Cavani.

Cavani, who joined United in the summer on a Bosman, was making his second start for Uruguay since the November internationals began. He scored the opening goal against Ecuador.

Game time will do his fitness good.

Read more: Man United fans could return to Old Trafford as soon as next month under new government plans