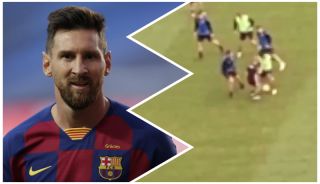 This clip of Amad Diallo on the training ground will get Manchester United fans excited.

The club confirmed that they agreed a deal with Diallo and Serie A outfit Atalanta, but he would not arrive until January when the winter transfer window opens.

Diallo dribbles the ball like Lionel Messi and runs around the fellow players like they’re mannequins or don’t exist.

It’s always encouraging to hear United chasing the most talented youngsters in the game.

Diallo is not a player many would have heard of before signing for the Reds. He’s 18 and hasn’t played much football for Atalanta since his transfer to United was announced.

Perhaps Atalanta don’t see the point in developing a youngster who they’ve already secured money for… and prefer to work on their other starlets.

They are 6th in the Serie A table but equal on points with champions Juventus on 13 after seven games.