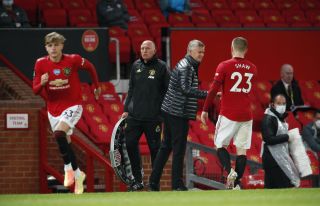 The left back position is something that Manchester United fans have been calling for the manager to strengthen for quite some time now, and they finally got their wish in the summer transfer window. Alex Telles was the new man brought in, a sharp, intelligent attacking full back from Brazil, signed from FC Porto in Portugal. United fans were thrilled about this signing, as the team had been lacking in attacking ability from the left back position, and if anyone were to fix that, it would be Telles.

We caught just a glimpse of what Telles can do when he made his debut against PSG in the Champions League. He delivered pinpoint crosses, was strong on the ball, and looked to fit right into the squad. The man that Telles was signed to replace, Luke Shaw, played in a deeper role that match and put in a solid defensive performance.

This article will discuss what the future of Manchester United’s left back role could be, and how it could possibly affect the entire starting XI.

Telles’ arrival at United didn’t go exactly how fans would’ve liked, or even expected. Following his first game against PSG, Telles tested positive for COVID-19, which Ole Gunnar Solskjaer didn’t reveal until after that weekend’s nil-nil draw against Chelsea. This meant that Luke Shaw would retain his role for the next weeks leading up to the International break. Much to the surprise of United fans, Shaw put in some very impressive performances in these past weeks, even if the team performances haven’t been at their best. His attacking play has been some of the best we’ve ever seen from him, capped off by his beautiful cross for Bruno Fernandes’ headed equaliser against Everton.

There was buzzkill in the same match for Shaw, however, as he picked up a hamstring injury during the second half, which the club states will keep him on the sidelines for four to six weeks. Solskjaer pointed out his frustration with the way official scheduled United’s matches, stating: “They set up the boys to fail. We’ve got Luke Shaw injured today […] we’ve been to Turkey Wednesday night, come Thursday morning, we’re back in, we’re playing Saturday lunchtime kick off, it’s an absolute shambles” (via BT Sport, 2020). The entire squad will be disappointed as well with Shaw’s injury, as he’s been a real asset going forward these past few weeks.

Coming back from the international break will be Telles’ time to shine. He’s now recovered from COVID-19 (or has he?) and is training with the Brazil national team. Although the news about Shaw is disappointing, United fans will be slightly relieved that their new man can finally get an extended run in the team. This will be the Brazilians’ perfect chance to prove that he’s the right man to fix United’s left flank.

When both players are both fit and ready to start matches, who should get the nod? It’s hard to say at this moment, because Telles has only played one match for the club. So, could we see the two players start together? If we did, it would be in a five at the back formation, with Luke Shaw playing at left centre back in a back three, where we’ve seen him excel in big game matches. This position means that Shaw doesn’t have to run back and forth too much, and we have seen him get beat for pace in recent months when tracking back. Telles, then, would obviously start in the left wing back position, where he would be free to move up and down the line and join the attack, and maybe even cut inside at times.

We can’t forget about Brandon Williams either, who put in some decent performances when he was given a chance last season, but after a while, the negative aspects of his game started to show, and he fell out of favour with the Manager, and the fans. Williams also played for the u23’s this season in a right back role, in which fans would rather see him play, as he’s naturally right footed. He could be a decent back up to Aaron Wan-Bissaka, but that depends on how well Diogo Dalot’s loan spell at AC Milan goes.

It’s clear that when Luke Shaw returns from his injury, Ole Gunnar Solskjaer will have some important, and difficult decisions to make that tactically could shift the entire balance of a single match. We’ll all have to hope that he makes the right choices, especially when it comes to important matches, which all matches are at this point in the season.